Go here to donate in aid of the ALS Association
LATEST DOWNLOADS:

Where the money goes
The ALS Association sent us a super helpful guide to explain how your donations help them directly, and where the money ...

Melissa’s story
Our inspiration for the Daily Dose Days – and to raise funds for the ALS Association – has always been one person: Melis ...

Care services
It’s more than the research. The ALS Association represents so much more. Their care services provide essential support ...

They’re pushing to fast-track the trial of a new drug that slows down the progression of the disease.

Here in the UK in 2020, researchers found an important way that a gene involved in ALS deteriorates, which they may be able to use to develop a therapy. Currently no therapy exists to treat ALS. 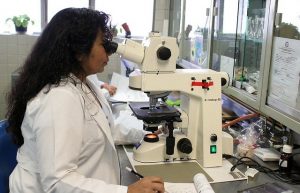 They’ve also grown their own genes from the skin of ALS patients and reverse the damaging genetic bodies and proteins – one of the key traits of ALS.

Then in late 2021, scientists in Israel discovered a key gene that they found can later degenerate, the same way that ALS operates – and found a direct link between the two. They are hopeful of using that research to work on a reversal of that trigger, and they’ve even found a way to restart some of that cells that had begun to die.

And they’ve just discovered that stem cell therapy has some potential to slow the progression of ALS, and they’re looking into that right now.

“The science is really exciting, and I think that’s driving a lot of companies to have programs,” said Merit Cudkowicz, director of the Sean M. Healey & AMG Center for ALS at Massachusetts General Hospital. “I remember people telling me it was a dead-end career to go into ALS research. It’s a hot time to be an ALS scientist. They all want you.”

We’re getting somewhere. It’s all really encouraging. Now isn’t the time to slow down, though – quite the opposite! The ALS Association are are the largest private funder of ALS research in the world, yet they count on donations. Their efforts have led to some of the most promising and significant advances in ALS research, but they will continue to rely on the generosity of others to continue their work.

If you’re able, and you’re enjoying Daily Dose Day, I’d be so grateful if you’d consider making a donation to support their work. It helps fund their research, and takes us a step closer to that cure. There’s an easy way to donate through the button on this page, or via our Justgiving page (the button just takes you to the same place).

Features
NEXT POST
We use cookies on our website to give you the most relevant experience by remembering your preferences and repeat visits. By clicking “Accept All”, you consent to the use of ALL the cookies. However, you may visit "Cookie Settings" to provide a controlled consent.
Cookie SettingsAccept All
Manage consent

This website uses cookies to improve your experience while you navigate through the website. Out of these, the cookies that are categorized as necessary are stored on your browser as they are essential for the working of basic functionalities of the website. We also use third-party cookies that help us analyze and understand how you use this website. These cookies will be stored in your browser only with your consent. You also have the option to opt-out of these cookies. But opting out of some of these cookies may affect your browsing experience.
Necessary Always Enabled
Necessary cookies are absolutely essential for the website to function properly. These cookies ensure basic functionalities and security features of the website, anonymously.
Functional
Functional cookies help to perform certain functionalities like sharing the content of the website on social media platforms, collect feedbacks, and other third-party features.
Performance
Performance cookies are used to understand and analyze the key performance indexes of the website which helps in delivering a better user experience for the visitors.
Analytics
Analytical cookies are used to understand how visitors interact with the website. These cookies help provide information on metrics the number of visitors, bounce rate, traffic source, etc.
Advertisement
Advertisement cookies are used to provide visitors with relevant ads and marketing campaigns. These cookies track visitors across websites and collect information to provide customized ads.
Others
Other uncategorized cookies are those that are being analyzed and have not been classified into a category as yet.
SAVE & ACCEPT